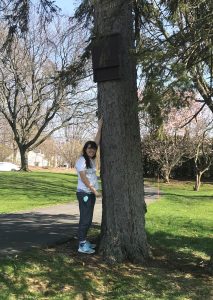 Carissa Horton is a senior at Rockville High School, as well as a member of the Agriculture program and a Gold Award Girl Scout.

Her project on the Farm started June of 2019 when she put up 3 bat houses around the property. Bats are an important animal, both for the environment and agriculture and Carissa wanted to provide more habitat for them. Even though bats are key pollinators and helpers in seed dispersal, populations of bats have been decreasing, for two main reasons. For one, they use trees to roost in, and deforestation is occurring at alarming rates. And a plague called White Nose Syndrome is invading bat populations, killing over 6 million bats in 13 years. Carissa knew she wanted to do something to help bats for her Gold Award project, and what better way  than to support local agriculture in the process!

She monitored the bat houses every week from July to November, starting again  in April.  In addition to the bat houses, Carissa has also had multiple opportunities to speak about bats at Strong Family Farm. She given talks at Strong Farm meetings about the benefits of bats, has had a booth at the Harvest Festival, and her own Pollinator Booth at other farm events.
Read more about Our Vital Pollinators.