Dan Gallagher says the most important thing to know about him is that he laughs easily, even at himself, despite being a serious person. “I am known to start preaching Grow Your Own, or at least know how at a moment’s notice. You don’t have to believe what I espouse; nature does what nature does, and all I do is try to better understand – sometimes subtly – what nature tries to teach me.” 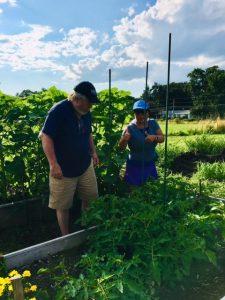 Dan has been an active gardener and educator since 2004. He established The Crazy Half Acre: Insect Sanctuary, Weed Sanitarium, and Earthworm Research Center, and founded Bucketeers of America, an ongoing urban agriculture study. Dan is also a founding member of PAPA: Practical And Pragmatic Agriculturalists. He became a Certified Master Composter in 2016 from Middlesex County Agricultural Center. Most recently he became the only Phenologist in CT.

In 2017, Dan installed solar panels to power the well pump at the Manchester Community College community garden. The system now also charges the batteries for the lawnmower, trimmer, and hand vac that is part of the pest management in this organic garden.

Dan received his Master Gardener certification in 2018. As part of this certification, he developed Garden Talks at The Hillstown Grange. For this outreach, he was awarded a Good Citizen Award by the State Grange President.

Dan has given talks and grown gardens all over the state, including the Manchester Community College community garden, Farmington, the East Hartford Senior Center, Goodwin College, and The Hillstown Grange. He now shares his wisdom and experience at Strong Family Farm every Wednesday evening from 6:00–7:00pm for our gardeners and the general public during the growing season. Come Garden, Learn, Share, and Grow!

Grow Time in the Garden

Thanks to all of our participants and sponsors who

Clean-up Day on the farm is coming up! Saturday, M

There's still time to register for our Annual 5K C

We have new benefits for Members! ✅ Raised Bed